Note: This article contains a picture of a doodle drawn spider from an old internet meme.

2016 was a big year in gaming for Bethesda fans. At E3 2015, they announced mod support for PS4 and Xbox One users for Fallout 4. Additionally when Skyrim Special Edition was annouced it also would come with mod support.  Finally, console gamers could have a taste of the modding fun! Mods are responsible for things like this My Little Pony dragon replacement mod for Skyrim, or this one that turns the trolls in game to internet trolls. Finally, us console gamers can be one step closer to the glorious “PC master race” that has eluded us! But console mod support has another unintended benefit: those with phobias and disabilities can now join in on the fun. 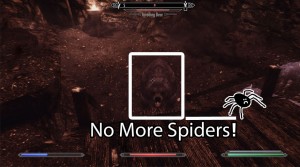 There are many, many, phobias and many degrees to which those phobias affect those who suffer from them. Some people just need to kill the spiders they see, while others may be so paralyzed that they can’t do anything. It’s never fun to have a phobia accidentally triggered, even more so when you spent up to 60 dollars on it and can’t get a refund. Your copy of Fallout 4 or Skyrim may sit on the shelf or in your hard drive gathering dust because you didn’t realize one of your phobias was in the game.

Luckily, with the added mod support, many users like Joescreamatorium and yrock1234 have created texture replacement mods to replace things like bugs, zombie-like ghouls, crabs, and spiders with non-triggering textures for other creatures in the game. User yrock1234 even went so far as to replace the items dropped by the insects with same-effect items that fit with their new textures. The bears they replaced the spiders with (shown below) now drop beehives instead of spider web sacs that have the same in-game effects. Clever! 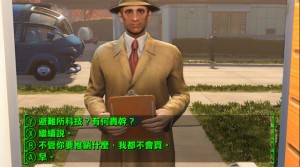 User Cirosan made Fallout 4 specifically more inclusive by adding a mod to ‘fix’ the dialogue system. In the unmodded version of Fallout 4, you don’t actually get to see what your character is going to say. Instead you see a rather general prompt, like THREATEN or ASK FOR CAPS. Sometimes you can be more or less of a jerk than you intend. With this mod the text your character speaks is clearly shown on screen for all four dialogue options, eliminating the guesswork. No wondering what sarcastic or emotional thing your character would say. Their mod is available in TEN languages at the time of writing, and they seem to be working on more. 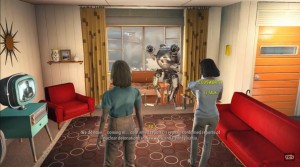 The modder did not upload any images, so this is a screenshot taken from The Gameplay TV.

On the LGBTQ* side of things, Skyrim doesn’t really need any modding.

For romances in Skyrim, as in Fallout 4, any eligible NPCs that can participate in the relationship/marriage system will marry your character regardless of gender. Neither game makes any big deal of your character choosing to be with male or female NPCs. You are also not ‘locked in’ to whichever type you choose and can change throughout the game. However in Fallout 4’s opening few minutes, your character is defined by experiences with their opposite-sexed partner and their child in a heteronormative fashion.

User Overseer777 has modded a way around this by changing all references made in-game to the spouse and changing the beginning to have your spouse’s in-game model match the sex of yours. Heteronormativity is a problem in gaming, with most games only option for opposite sex relationships. It is amazing that Fallout 4 and Skyrim are not heteronormative, and this mod helps seal the deal. 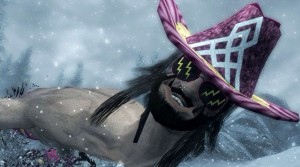 Game mods can be sources of absolute hilarity, cool new content, all the cheats you could want, and more. Mods are also a great resource for making games much more friendly and inclusive for everyone. In the future, I hope that other developers begin to support modding on consoles. Modding is making gaming more accessible for everyone, and that’s a good thing. Besides, who doesn’t want to be able to turn their in game enemies into Macho Man Randy Savage? I know I do!

—
Anna uses she/her pronouns and is an avid LARPer and console gamer. On weekends when she isn’t a vampire she treks to the woods to beat up her friends with plumbing supplies.  Anna is a feminist, part of the LGBTQ* community, and is the proud owner of two loving cats. Anna is on Twitter at https://twitter.com/squeenoodles