I started gaming as a late teenager, first in AIM chat rooms in a friend’s D&D campaign, then moving on to weekly tabletop games at a local store. Boy, was I awkward! That guy who raises his voice a bit too high when laughing, or seems to not quite get the flow of conversation? Yeah, pretty sure that was me. It took me some time to improve, but I credit gaming for a large part of that success. It gave me an environment to watch how other people interacted on a typical basis, and emulate them. I got to act out characters, help in group decisions, and come together to craft wonderful stories.

LARP taught me social interaction a bit differently, given its much broader scope: the first event I played in had dozens of people playing monsters or their own character. The game I play in now averages over 40 attendees a month, and the largest LARP event I’ve been to had almost 400 players in one night! Through LARP, I learned more about personal display and expression on a larger scale, as player and storyteller. I learned to act and reign in emotions better. I’m not the only one, either. My game has other players who, over years of playing, also improved their ability to relate to and get along with others. If that’s beneficial, I’m really happy for them.

Even if you don’t care about the social skill-building aspect, just having friends you regularly see, and spending time together, generally makes us feel good. The stories we make are fun! Character improvement is fun! Practicing your acting skills is a kind of fun! I can’t think of another experience quite like Live Action Role Playing, which is why I’m disappointed when the social aspect fails its players.

Let’s imagine these scenarios from a LARP game:

Are any of those scenarios familiar? I’ve seen them many times myself. Some players appear to be waiting around forever, or are just bored, but we might be unsure how to approach them or we’re busy. Nods for experience, going to the same players, could just means those players learned how to get attention, have good friends, or are superb actors. It’s the same with the last case: players who know how to form their parties and participate will get a lot of the hooks. Games may have an equalizing factor – our abilities in real life don’t need to have anything to do with our characters’ – but they are not egalitarian. Social systems, too, are played and gamed. 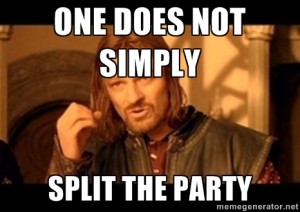 Why does this matter? Because some people constantly feel left behind.

I still see myself as the awkward kid who never quite grew out of it. I still struggle with joining events, getting myself noticed, or keeping my energy up in large groups. I know I’m not the only one out there who finds the social aspects difficult, even if the game can be a lot of fun. Sure, everyone shares responsibility to improve themselves and fit in, but there’s only so much one person can sometimes do; our internal resources are limited.

It’s not as if there’s a single cause for this situation. There are plenty of active players and storytellers who try to extend plot and scenes to those who don’t participate as much, but keeping track of everything and everyone is a tough job. At the same time, there are also plenty of less active players who don’t want to make as much of an effort to be active in the game. Maybe they’re less invested for personal or historical reason. Cliques will also happen anywhere we have people – you can try to stop them from forming, but that won’t happen.

That said, I wonder if something could actually be done on a larger scale. I’ve seen increasing numbers of LARP organizations, and individual games alike, make strong statements of various inclusivity in their policies. It looks like a trend of increasing acceptance and diversity. If we understand that LARP is an intrinsically social activity, and we want to be inclusive, what do we do with people who have more trouble on the social part? We could put our foot down and say that some people just aren’t a good fit, but that’s exclusive. Maybe those of us who aren’t as easily social come because we harbor a hope of improvement, as at odds with the systems as we are. Maybe it’s our only outlet, or only way of keeping up with our friends. We’re not here for real life!

Could there be a more systematic approach to fair inclusion and participation? Do we want our games to just be games, or acknowledge and further develop the aspects of personal development? I’m not sure. I can imagine the push-back from people who fear the game becoming less about gaming and more about support. Even so, I think it wouldn’t be impossible to have an organization promoting conscientious behavior to its players, a “best practices” kind of deal.

For those of us who are a bit less comfortable but still having fun, I hope we can at least have the conversation.

Ariel is a player and former head of a World of Darkness LARP, as well as an officer of its parent organization, The Garou Nation. He enjoys trying different game systems ever since he encountered his first rulebooks at the age of 13. In the rest of his time, he works on many projects ranging from computer tech and language learning all the way to Queer media, when he’s not trying to find the best bowl of ramen outside of Japan.