Ask people why they LARP, and they usually answer roughly the same. The most common answer is their own form of “because it’s fun” or “because my friends do it” and both of those answers are great. Did you know there are actual benefits to LARPing in addition? Examining LARP shows there are many benefits to it that are hidden just beneath the surface. In this series of articles five of these hidden benefits will be expanded upon and detailed. For more information check out the other articles on Education, Networking, Social Skills, and Creative Outlets.

While this article focuses primarily on Boffer style LARPs, being healthy is good for you in general!

In the dark of the cave Mal, Lucy, and Virginia blew the computer, allowing Capillary to escape the cave. Everything began to rumble and shake as the cave began to fall around them. The three hackers ran back to the main group as everyone ran for their lives.

The above scenario happened at a Boffer LARP I play called After the End (which you should come play if you’re in the Tennessee/Georgia area!). If it were a parlor LARP we may not need to physically run in real life. In Boffer style LARPs however there are situations where you’re going to need to actually run. Most people are going to be able to run some without being winded too badly. However if the person chasing you is much more fit, you get caught. If it is a long chase, you might run out of stamina. For people who aren’t very fit the running may prove difficult. Sometimes I even have trouble with running up and down stairs a lot, which can make LARPing out in the woods super tiring.

Many of my friends (and myself to a lesser extent) have begun simple or complex exercise routines in order to combat LARP fatigue. LARP itself can be it’s own form of exercise as well, and exercise can be incorporated into your LARP routine. We’ll be going over those topics below. 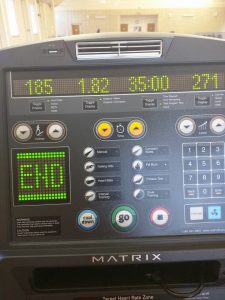 A lot of people that I know have begun hitting the gym to be in top shape for their Boffer LARP experience. They range from beginners at Couch to 5K to regular gym attendees to ones who have started their own podcast for more broad health topics (shout out to Ty and Sky!) and everywhere in between. Even something as simple as walking outside once a day can help you keep up your endurance for a LARP weekend. Many of the people I know exercising have already started seeing benefits in the relatively short time they have been exercising. They are less tired after intense weekends and are eating better and noticing muscle gain and fat loss. Exercising for LARP has begun helping improve the non-LARP life of many of my friends, and I think (if able) everyone should give it a try. 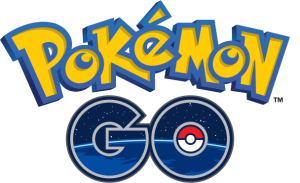 With the popularity of apps like Zombies, Run and plenty of other augmented reality exercise games, exercise is easily made into a game. Go out walking and catch Pokemon or capture bases for the Enlightened. Run from zombies, aliens, spies, ghosts and tour virtual facilities all while exercising. There is little stopping a group of friends from turning their progress in these apps into a LARP game. The Ingress and Pokemon Go communities are massive and global, and people take their teams very seriously sometimes! 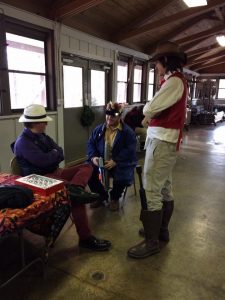 Anthem, Irving, and Vitez (characters at After the End) discuss the meaning of “feather in your cap.”

This picture illustrates a very easy way to incorporate a small amount of exercise into your LARP routine. Did you notice it? Did you know standing burns roughly your body weight in calories per hour that you do it? Anthem and Irving (who work out separate from LARP) are resting in the photo. Vitez, however, remains standing and does a small amount of exercise while having an in-character chat. Patrolling the borders of the site is another good way to add a little exercise to your routine. It also has in-character benefits too, because you help keep your town area safe.

For Parlor LARPs, you can walk around site while having a private chat.

LARPing can be tiring, but with some dedication it doesn’t have to always be. By choosing to exercise for, at, or by LARPing you will begin to see some serious benefits. Eventually you will look back on old character photos and be proud of how far you have come. Be sure to check out the other articles on Education, Networking, Social Skills, and Creative Outlets for more ways that LARP can benefit you!