Ask people why they LARP, and they usually answer roughly the same. The most common answer is their own form of “because it’s fun” or “because my friends do it” and both of those answers are great. Did you know there are actual benefits to LARPing in addition? Examining LARP shows there are many benefits to it that are hidden just beneath the surface. In this series of articles five of these hidden benefits will be expanded upon and detailed. For more information check out the other articles on Networking, Health, Social Skills, and Creative Outlets.

Did you know that during the Civil War, if a lady was unmarried and under thirty, she was never to be in the company of a man unchaperoned? Except for a walk to church or a park in the early morning, she was not supposed walk alone; and should have always been accompanied by another lady, a man, or a servant. How about in 1240, Mongols led by Batu Khan sacked Kiev and killed 48,000 people? Do you know the date the first Black Sabbath album came out? Roughly how many nightclubs there are in the United States? The German word for ‘sorcerer’?

The questions above are things that I learned for the characters I’m playing now.  I play in Underground Theater, which  I’ve only started playing in the last two years. In such a relatively short time period I have learned so much unrelated to LARP specifically because of LARP. For LARPs based in the real world, you end up learning tons of trivia and other fun facts that you can bring out at parties or trivia night and discuss with friends. For boffer LARPs, you may end up researching different weapon types or clothing styles of a particular era. You may even learn how to write some words in another language. When I played a survivalist who would be up at dawn to explore, I researched on different animal tracks so I could identify trails, so I knew if I might run into a dangerous animal, or just a deer. 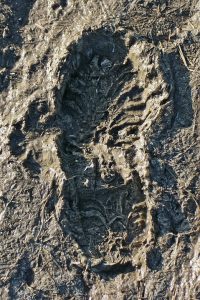 Or this “human” creature that I’ve heard about.

Another facet of the educational aspects of LARP is the challenge to your worldview. You will meet many people who have a worldview different than your own, and it can help to expand yours.

Because of where I live and where I grew up, nearly everyone I knew growing up was white. My schools were primarily white or Hispanic students. Most came from lower-middle class, mostly from families where the parents worked in manufacturing or retail. I had a couple of out LGBTQ* friends but I didn’t really know what that was all about. I didn’t know any of the PoC at my school as close friends or even acquaintances.

Even when I went to college my worldview didn’t expand too much at first, but then I joined a D&D game and the DM was always going LARPing. Eventually I decided to check out this LARPing thing and I was hooked! Now I have so many friends who are LGBTQ*, myself included! Not all of my friends are white, and I consider myself much more receptive and accepting of differing world views.  I realized that ultimately we’re all people and we share a common love of the game.

When you’re at LARP, you realize that despite all of their other differences, everyone there likes to LARP and you can talk to them about LARP. Being around them when character is broken, at afters, or social events lets you gently become educated on what life is like for them. When you add these friends on social media after the game you get to see what they go through. You learn what they like and what they dislike, which tends to leave you more open to accepting the differences.

However LARP will not help you accept using 7 different fonts on the same sign.

What Else Can I Learn?

There are so many more ways that LARP can educate you, but this is an article and not a textbook. Researching for a character can help you learn more about the world in which we live, and inspire you to educate yourself further. LARP can also help you expand your worldview and make you more open to becoming accepting of other races, religions, gender identities, sexual preferences, relationship types, and even simple stuff such as music preference. Be sure to check out the other articles on Networking, Health, Social Skills, and Creative Outlets for more ways that LARP can benefit you!