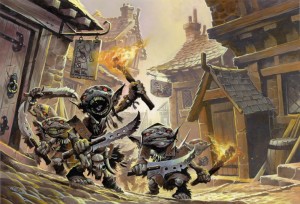 I’ve always liked Goblins. For some reason they were one of the races in Dungeons and Dragons which I always had a soft-spot. Perhaps it’s their small stature, I’m also short. Perhaps it was that they were always perceived as strange, hyper-active, or outside of the majority of societies in the main settings for D&D? I’m not sure, but something about goblinoids always intrigued me. I scrambled at the chance to make a Goblin character whenever I was given the option and I was happy when 3rd edition made it easier to play ‘monster races.’ Even better, for my love of Goblins, was a fully realized identity and depth of character background provided by the Eberron Campaign Setting. In Eberron, goblinoids are presented as once having a great empire that spanned the primary continent Khorvaire. They were no longer an imperial power, but they were present throughout the main story world, and they had carved out their own new nation in the wake of the Great War. Goblins are shown as protagonists and antagonists, they are rulers, servants, warriors, bards, poets, and historians. Basically, Goblins are living breathing character options.

So, why does this matter?

Keith Baker gave us an opportunity to see Goblins as more than villains, to see a world where things were not black and white, even if an alignment system exists in the game. Goblins are usually weaker than the player options usually presented and they often one of the first villains a D&D party has to face. That makes them boring to most players. The players sweep them off the table and forget about them. However, this dehumanizing element is not a great way forward. Goblins and other races can be used by Game Masters in a much more effective way. These groups can be brought into a game in a way that a shows respect to them and does not make them insta-villains or mooks to be killed without thought.

Here are a few ways to help do that, focusing on Goblins. 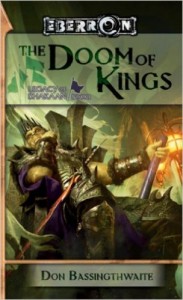 Clan Harchuuk. Giving them both a name for their people and individual names makes them more real, it makes them have a back story. Why are they the Darguul? Why do these two belong to this particular clan? Are all Goblins in clans? Do they have a history and clan structure that you can use in the future? All of these questions derive from the use of a name and they can help provide depth immediately. Even if you never flesh these characters out more than that, you’ve given them a little bit more life than you might have otherwise.

Describe them: Well… duh, right? This is a game played in the imagination of course I’m going to describe them, right? Sure, any good Game Master is going to describe her characters effectively. However, I’m talking about deep description at key moments. “Their long ears are tingling, tight to their heads. Their eyes are squinted and their mouths upturned with teeth exposed. You’ve made a major faux pas at the banquet, but you have no idea what you’ve done.” Goblins, like humans and other humanoid groups are highly expressive. Unlike humanoids, they have long ears, and those ears, as anyone with a dog or cat knows, tend to be major sources of body language expression. Add onto that a fully intelligent cultural group of beings and you have the opportunity to create all kinds of cultural nuance and meaning around their ears. This is easy to add in, just another brief description, but it can truly sell their reality as a separate, interesting group of beings to play or have within your world.

They aren’t all evil: Have your characters run into an adventuring party of goblinoids, not as enemies, but as fellow good adventurers. This isn’t just about flipping stereotypes, but it is also about showing a more realistic situation. Not everyone in a community is the same, not every group of people are identical and most are trying to do things that make their lives and the lives of their families better. A group of Goblin adventurers would have just as much interest in spelunking the dungeon in the hope of finding treasure as a group of halflings and humans. Have the party meet with the well to-do traveling salesman who happens to be a Hobgoblin. The more you incorporate goblinoids into your world as real thinking living beings the more the party will start to recognize them as such.

This is just a surface level of ideas and methods to bring Goblins into your games. The goal, in the end is to use the aspects of the race in a way that is interesting and engaging for your players. One great way to do that is to let a player, make a Goblin character. Let them help you fill out the background of the goblinoids in your world and give the chance to really bring them in to full vivid color.

Images used are the property of Paizo games and Wizards of the Coast respectively, their use here is in no way an attempt to claim ownership of those images, simply to show homage to their use of Goblins in their games and stories.