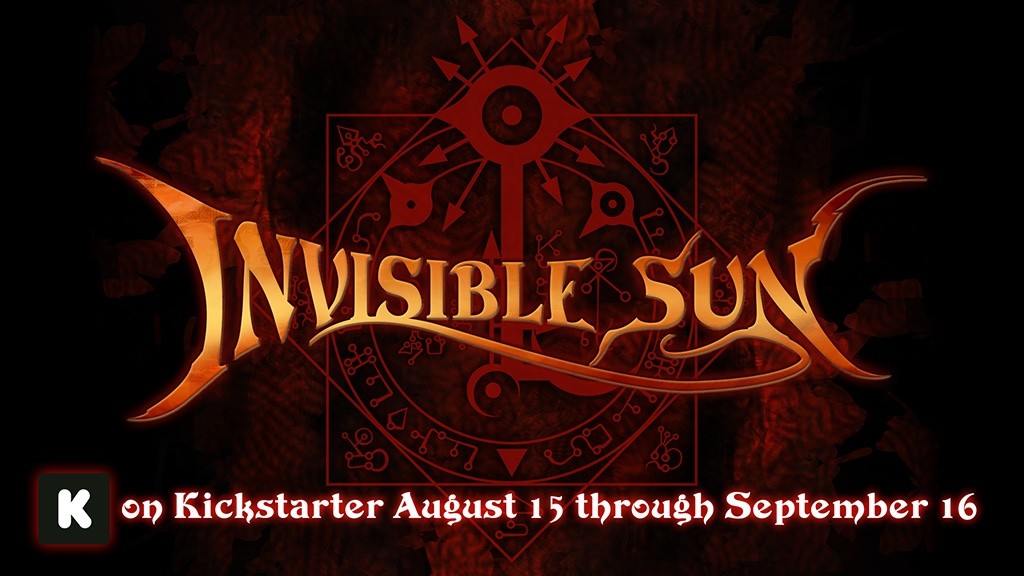 Life is a pure flame, and we live by an Invisible Sun within us. – Sir Thomas Browne

The quote above is credited by Monte Cook games as an inspirational source for their new game Invisible Sun.  Invisible Sun is a highly experimental RPG that includes elements of board gaming, formalized rules for downtime sessions, and rules for engaging players with different playstyles in a variety of ways.  The board game elements bring a tactile experience that has been less prevalent in RPGs since the industry moved away from the miniature figure and occasional terrain inclusion of yesteryear.  The board game elements also allow more complex role playing systems like multiple percentage roles for determining randomized effects to be handled though simple dynamics like drawing cards from a deck.  The game includes a beautiful resin statue meant to display cards that impact game play so everyone can see them, and the first stretch goal was a spell and artifact grimoire that includes spell cards for every spell in the book.

When I first saw the kickstarter for Invisible Sun I was at first excited, then disappointed, then excited all over again.  It took me a while to figure out exactly how I felt about this whole RP experiment. The problem is the lowest pledge reward is $197.  Yes, you read that right.  One hundred and ninety seven dollars, and that pledge level doesn’t include the majority of the stretch goal material.  For the past several years I have been increasingly concerned about the trends in game development that make it difficult to bring new players into the hobby.  Some of these issues are related to how difficult it can be to dive into modern role playing games with any kind of mental processing challenges.  I started thinking about these issues in earnest largely because of the first post on this blog, which focuses on the challenges of role playing with memory issues.  Other barriers to role playing are purely financial, which is an increasing problem in the 20teens.  The books just seem to be getting larger and larger, with each edition being more expensive than the last. With a few exceptions we have not really seen any tools to break these games down into more systematically manageable, and affordable pieces.

Comparison of the most recent Vampire the Masquerade LARP and Tabletop books to the most most recent editions released from the original White Wolf era.  The modern books here are the thinner basic print quality.

The one fairly high profile aid designed to streamline the process of juggling rules mid session are the spell cards Wizards of the Coast published as part of the D&D 5th Edition line.  In the last year I’ve seen a few companies follow WotC’s lead on spell card inspired products, and at this year’s GenCon I saw a few companies experimenting with tools and game design that break away from the tables, charts, and expansive RP tomes that currently dominate the gaming market. Those experiments were not the norm though.  The majority of what I saw at GenCon still leaned towards heavy, ornate, leatherette bound special editions with little in the way of gaming aids.  Even a few small indie publishers were still defaulting to this format, despite not having an established brand to back up their price point.  When gaming aids were available they were generally being produced by third party companies for extravagant prices.

So when I saw Invisible Sun announced I was phenomenally excited, and when I saw the price the day the kickstarter went live my heart fell.  Several people expressed concerns about the price in the kickstarter comments.  The game devs responded, saying that this was a premium product, and that part of why they are aiming for such a luxury experience is that their last few game products were specifically targeted at affordability, so they felt like this was a good time to aim for a different segment of the role playing market.

I decided to check and see what “affordable” really meant.  I was incredibly surprised to find the Numenera Player’s Guide pdf was only $7.99 and a hard copy was only $19.99.  This book is advertised as including all the rules necessary for a player to make a character, and generally get up to speed on the setting and core rules.  I haven’t seen a price point like that on a major game line since the 90’s, and being primarily a World of Darkness player I’m used to the go whole game or go home design philosphy.  It was very refreshing to see a product priced and designed for players who know they will never need GM materials.  After seeing this I decided to go back to the Invisible Sun kickstarter and take a second look at what was being sold for that $197. As it turns out that price tag covers a lot of game material, and it left me wondering how that actually stacked up to what it takes to get started with a traditional role playing game.

As a baseline I decided to compare the Invisible Sun box to the price point for running a decent Dungeons and Dragons 5th Ed. campaign.  I’m not counting the D&D startup boxes, because they really only give you enough to decide if you want to purchase the rest of the game.  Assuming you need at least 1 Player’s Guide, 1 Dungeon Master’s Guide, and either 1 campaign book, or the Monster Manual if you’re going to create your own campaign, your initial book investment would be $150 MSRP (I know Amazon is less, but let’s assume you want to support your local game store).  A basic Chessex Dice set is $4.  So we’re right around $154 with no game aids.  If we add in a wet erase mat, a few miniatures, the Arcane spell cards and 1 set of healer class spell cards we overshoot that $197 initial purchase cost handily.  Given what is included in the Invisible Sun Black Box this seems like a reasonable comparison.

Just to make sure D&D wasn’t a one off example, I looked at some of Onyx Path/White Wolf’s products.  The World of Darkness 20th Anniversary core books cost between $50 for a relatively moderate quality print on demand text to $115 for a premium print on demand copy of Mage the Ascension 20th Anniversary, and are not available with free shipping or any kind of Amazon discount.  Chronicles of Darkness has a similar price point since you need the core rule book as well as one of the specific game texts such as Vampire the Requiem or Beast the Primordial to really run a full chronicle.  While that may seem to provide a slightly more affordable point of entry than D&D to run a reasonable World of Darkness game, you generally need more than one copy of the book as during combat players often spend a lot of time hunting down exact rules for their actions so they are prepared on their turn.  There are spell cards available for some of the games in the Chronicles of Darkness lines, but not all of them.  A comment on a recent Onyx Path blog indicates they are going to begin to release similar products for the World of Darkness 20th Anniversary line, but these cards are not yet available.  So at many tables multiple 500+ page tomes are a necessity, as are far more dice than are ever needed for Dungeons and Dragons.  Again, we have very rapidly overshot the $197 price point of Invisible Sun, and we have far fewer game aids available to help make the play experience more accessible.

The primary problem with the Invisible Sun model is that with other properties players will likely pick up the extra dice, copies of the player’s guides, spell cards etc. for themselves.  With Invisible Sun everything is wrapped up in a single product, and while Monte Cook Games has encouraged players to split the price, generally people are going to be less likely to do that if they don’t own the fruits of their expenditure, and no collector is going to be comfortable breaking up an Invisible Sun Black Box.  There is now a player kit priced at $36 thanks as an Invisible Sun stretch goal, but that is an additional expense.  It doesn’t help mitigate the initial $197 hit.  Ultimately the game is incredibly well priced for what is included, and breaks much needed ground on accessible game design, but is less financially accessible than most games on the market because all of the expense is front loaded in a single purchase.

When all was said and done I did end up funding Invisible Sun.  I am still frustrated that the 15 year old me that bought his first copy of Vampire the Dark Ages after much scrimping and saving would have a difficult time investing in my favorite properties today, and would certainly not be able to make the dive into Invisible Sun. However, I am also aware that by the time I was done with high school I had spent well over $197 on my World of Darkness collection, and it was in many ways a less comprehensive assortment of role playing resources than what is included in the Invisible Sun Black Box.  I also remember far too many games with players who ended up leaving the hobby behind because navigating arcane texts, and tables filled with endless numbers kept them from truly enjoying the process of role playing.

Invisible Sun may not open role playing to a new generation of 15 year old geeks waiting in the wings of their local gaming stores, but it unquestionably breaks ground on making role playing games a more accessible experience. As long as Monte Cook is focusing on creating products at all price points, the innovations that work in Invisible Sun have a very real chance of making their way into more affordable game lines.  Hopefully over time these innovations will spread well beyond the scope of Monte Cook’s games and find their way into a variety of role playing products across the industry.  We can do more to make games that everyone can easily enjoy, and despite the sticker shock I honestly believe Invisible Sun is only the beginning of a trend in thinking about game design in radically new and elegantly accessible ways.