In 2001, I saw a book on the discounted shelf of my local game store, and stopped dead in my tracks.  There before me was the single best cover art I’d ever seen (true then, true now). An undead cowboy menaced viewers from the cover, one revolver held casually aloft, his coat draped open to reveal a panoply of lawmens’ badges, all drilled through with a bullet hole.  I did the most cursory flip through before purchasing it immediately.  I devoured the whole book in a single sitting, and was so enamored with the setting and system I didn’t even mind when I realized I’d purchased the first printing and had to go back and buy the second edition. What game was this? Deadlands.

Since then, Deadlands has been my go-to game.  I’m up to run it anytime, for anyone.  The books occupy the largest section of my RPG library, and it’s always the first suggestion I have when people ask me what new game system they should get into.  Although the game successfully transferred to the Savage Worlds system in 2006, I continued with the classic system. (It’s reasonably easy to do an approximate conversion between the two.) The game has continued with both plot continuity and developer continuity since its inception, and you will never find a more responsive and communicative developer than Shane Hensley.

With the 20th anniversary of the original release, I was thrilled to hear the announcement that Deadlands Classic would be given a re-release, with glorious new color artwork, in tandem with their latest plot point campaign book. My hope was that this might create a little more interest in the classic system for the game.  When Keep on the Heathlands told me I could write a regular segment, my first choice was a no-brainer.

If you’re not familiar with the setting, if you need a refresher, or if you’re trying to explain it to someone new, here’s the bare minimum you need to know:

It’s an alternative history game, but the history is largely our own. 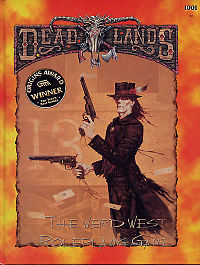 The game was set in 1876 when it was first released.  Various releases have advanced the timeline over the years, to 1882 in the most recent version. Until 1863, the history of Deadlands is, for all functional purposes, the same as that of the real world. So there’s less than two decades of ‘alternate’ history to worry about.

All the changes stem from a single event: in 1863, a supernatural cataclysm rocked the world.  The release of otherworldly power caused a titanic earthquake (shattering the coast of California) and releasing arcane forces back into the world which had been bottled up since the back half of the dark ages.

Since the Reckoning (the events of July 4, 1863) magic and myth have returned to reality.  Dead men do not always stay dead. Monsters of legend have begun to creep out of the shadows, some newly spawned, and some merely coming out after centuries of hiding. Ancient books of sorcery, encoded into books of card games, have regained frightening power, which are now wielded by keen minded cardsharps. The forces of good have risen as well: the truly faithful among the world’s religions now find they can call down the power of their faith to protect themselves and mankind. Native American mystics can call upon their spirits in ways both tangible and terrifying. Arcane minerals unearthed during the earthquake have given rise to bizarre steampunk science, most of which fuels the ongoing Civil War.

History is still being made.

The largest plots in Deadlands are based on real history.  The Civil War grinds on in a gruesome stalemate.  Westward expansion, driven by the discovery of gold and ghost rock (the mineral which makes mad science possible), continues to shape current events. The transcontinental railroad continues construction, with even farther-reaching and bloodier conflicts than ever transpired in reality.  The Indian Wars continue as well; the magic’s of the Reckoning have leveled the playing field a great deal. The events that shaped the real American West continue to play out, augmented by a world where the dead rise and the shadowy forces behind the scenes seem to seek out the ugliest and barbaric course for history to follow, as though by malevolent design. 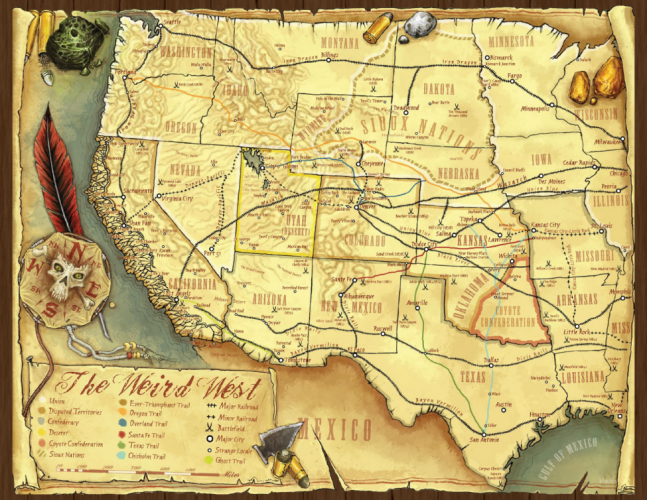 The system has been designed beautifully to maintain a true western feel.  Shootouts, staredowns, and quickdraws mesh seamlessly into gameplay. Characters are easy to create and advance, and are task-effective from character generation, while still maintaining plenty of room to grow. There’s none of the clawing your way through mediocrity at first level you see in some game systems, and very little of the deific power at higher levels that tends to accompany such systems.  Characters are always useful, but at the same time will always be challenged. Perhaps best of all, there’s a strong emphasis on flawed characters.  Like all the best western protagonists from William Munny to Cullen Bohannon, you’re not only allowed, but encouraged, to create characters who are seriously flawed yet still capable of seeing the larger threats that have begun to menace humanity.

Your options are limitless.

In a true historical setting, there are a great number of restrictions on characters based on race, nationality, gender, and the like.  Deadlands has been written with this in mind, the changes in the social setting remove or ease these roadblocks to allow the largest amount of diversity possible.  Players who might not otherwise feel welcome in a western setting can still enjoy Deadlands without feeling like the GM is jumping through hoops to accommodate them. (More on this next time!)

Did you miss out on the Kickstarter for the 20th Anniversary release of the classic rules?  That’s okay!  There was a merchant option pledge tier available, so you’ll likely still be able to get a copy of the anniversary edition for some time.  Even if you can’t track one down, it remains available from Pinnacle in PDF format.

Keep your eyes peeled here, as well.  As long as Shane and the gang continue to bring us gunslingin’ western action, I’ll be here to toss my own drop in the bucket, as well as try to catch newcomers up to speed or even provide some alternative viewpoints for veteran saddle tramps.