Every time I am asked to speak about women and gaming (especially women and LARPing), I get nervous.  This isn’t the usual “butterflies in the stomach” type of nervousness that one experiences when being asked to speak in public. As the seconds tick towards the start of a panel or podcast recording, I can feel my hands become clammy, my chest and throat tighten, and my breath quicken from anxiety.

I have identified as a gamer since the late 90’s (and as a LARPer since the early 2000’s).  My name is known – not only for the personalities that I have crafted on the game floor – but also for the ways that I’ve influenced at least one LARP organization.  I’ve worn the hat of Storyteller, Marketing Strategist, Web Developer, and Executive Officer (in One World by Night, it’s called “Head Coordinator”) – all in an effort to improve a community that I called home.  I’ve since shifted my energies and time towards The Hidden Parlor, a new LARP organization that seeks to enjoy the World of Darkness as further developed by By Night Studios while also tackling some of the tougher issues that face the larger LARP and fan community (more on that later).

Even when I reflect upon this resume and the reputation I’ve built for myself, being asked to speak about LARP from a woman’s perspective scares me. Part of me wants to simply scratch the superficial surface on what women gamers want.  Telling an audience to just ask their female players about the types of plots that they enjoy is considered a “safe” response.  Delving into the topic further – on issues involving the safety of and respect towards female (and minority) LARPers – paints a huge target on me.  Gamergate happened only two years ago, and it showcased how some within the larger gaming community are willing to react when faced with a progressive cultural shift.

I’m one of the lucky ones in that I never received a death threat for any decision I’ve made as a leader within the LARP community, and I would prefer for there to not be a “first”.   However, given that I know others – including men – who have been harassed online and received death threats over LARP-related issues, I think this visceral fear is justified.  Today I swallow back those fears. Someone needs to speak for those who LARPed and left, those who are LARPing now, and those who will join our community in the future. We as a community can do better on this topic. We owe it to the fellow fans of this hobby to do better.

We need to take issues of harassment and assault within the gaming/LARP community more seriously.  This is a collective problem, and the community as a whole needs to participate in the solution.

A few months ago, I had the privilege of being a guest on Tempus Tenebrarum – a bi-weekly World of Darkness podcast – for their Women in Gaming episode.  During the episode (about 27 minutes in), one of the hosts brought up a situation he dealt with:

Due to the tangential nature of that episode – as well as my previously stated nervousness when asked to approach such topics – we were not able to share an in-depth response. Looking back, I would have liked the opportunity for us to deconstruct the cultural “norms” that led to that situation and its outcome. 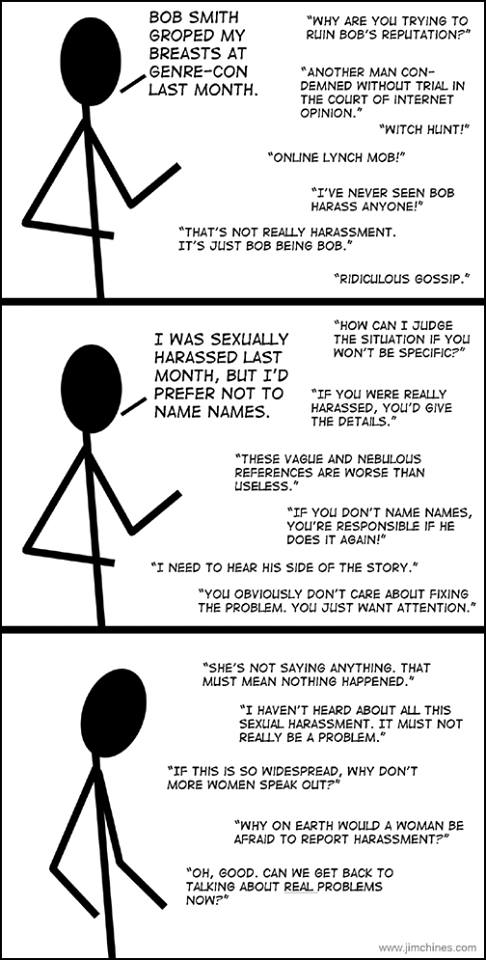 This webcomic by Jim Hines that was published on Facebook in August 2013 gives insight into why harassment at geek events (LARPs included) is an issue. Three years later, it is still very much an issue.

There are some who may take my drawing attention to this topic as a claim that LARP scene is extremely dangerous. That’s a straw-man fallacy. For the most part, LARPers are nice people who want to have fun in their fantasy world and want you to have fun with them. There’s a subset of that group who have not been taught how to check for consent, and there’s an even smaller group who feel they are beyond needing consent in order to get what they want (the real predators).  In those times where harassment or assault occur, we as stewards of our community must do a better job of providing support to the victim and taking proper corrective action against the assailant.

Why isn’t this reported to the police?

When a LARP club or event organizer hears about past instances of harassment or assault, they ask about law enforcement’s involvement, or lack thereof. Some have gone as far as to suggest that a club should not intervene in such issues – like banning the assailant, for example – unless a police report has been filed.

First, let’s take a step back and examine whether a filed police report should be a litmus test on whether a club responds to allegations of harassment or assault.

There are many reasons why a victim may not go to the police, which include:

Put yourself in the victim’s shoes – Imagine that you’ve been touched without your consent, catcalled, or noticed someone constantly following you around an event space. If you don’t know the person, spending hours to file a police report may seem futile because you are unable to identify your assailant. If you know the person, then the situation can become more complicated. Mutual friends may take sides. Some may defend the assailant by saying their intentions weren’t predatory, and that you overreacted by going to the police. Worse, others might spread rumors that you had ulterior motives to get the other person in trouble, or that you didn’t care if the club/event’s reputation got dragged in the mud. The risk of fallout to you seems far greater than the potential of justice against your assailant.

If you want to do your own research on why incidents of harassment or assault go unreported, look no further than Google: 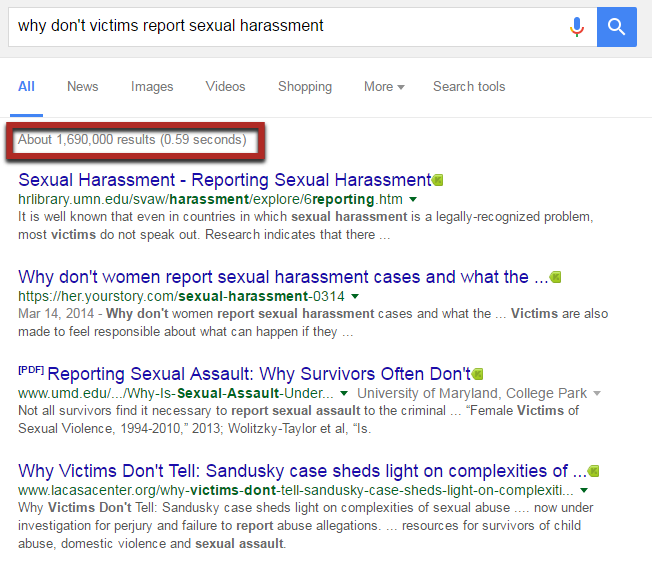 There are articles/blog posts from other coutries (like this one – translated from Swedish) that show that this problem is not limited to the United States.

The problem isn’t entirely a lack of information – it’s a lack of people acknowledging it is a problem that we can act upon.

Why isn’t this reported to the clubs?

Remember earlier when I gave the list of reasons why sexual harassment and assault victims don’t report those incidents to the police? A lot of the same reasons carry over to why they don’t report those issues to their LARP’s incident response / disciplinary team.  There’s often a fear of ostracism, especially if the assailant is higher up the social ladder. Some clubs also have a cumbersome disciplinary process.

A couple of years ago, I developed a membership engagement survey for one of the LARP clubs in order to help identify community issues and potential solutions. One of the sections focused on the organization’s disciplinary policy. I wanted to show how members perceived their game’s disciplinary process and how that might influence their willingness to utilize it in the event of an incident that might require a higher level of discretion (like, for example, incidents of harassment or assault).

110 people completed that section of the survey (the % of total members is unknown, since that network doesn’t keep count of individual participants) 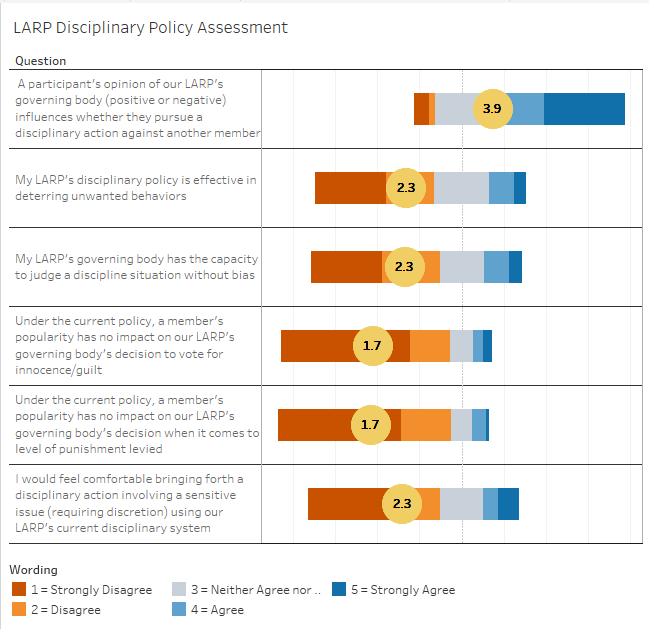 Let’s take a look at the final question. An average rating of 2.3 out of 5 (especially when 63% of respondents said they “Disagree” or “Strongly Disagree” with the statement) is not a vote of confidence for that disciplinary system.   The low ratings on several of the other questions (specifically on the perceived impact of the accused’s popularity) also are fairly disturbing.

I decided to examine the responses of those who responded with “Agree” (8 responses) or “Strongly Agree” to the (11 responses) to see how they compare with the group as a whole. 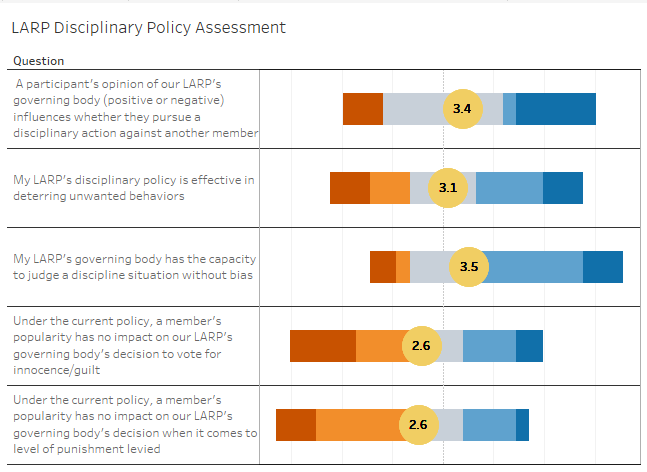 Unfortunately, when I tried to broach the topic of disciplinary policy reform with said club, I was met with a lot of resistance. Some dismissed the results outright because they thought the respondent pool was “too small”.  Others felt that PR work needed to be done to assure the public that the current disciplinary process was effective. While no one stepped forward to bell that cat, I am grateful that there were participants who realized that public perception needed to be changed.

If there’s little faith in a LARP/Club’s disciplinary process – even if the volunteers overseeing it are hard-working and impartial – members will be less inclined to report issues when they are small because they feel it isn’t worth the personal drama. This is especially true for matters that require discretion, like incidents of harassment or sexual violence.

I think back to the various instances where lines were crossed.  I’ve had guys (yes, multiple instances) think it’s okay to put their arm around me and caress my shoulder without permission.  I’m not a fan of being touched beyond a hug unless it’s someone who I am comfortable with.  I’ve had other guys get into my personal space and not understand my nudgings for them to leave me alone.  Each time, I felt that what happened to me – while inappropriate – was not severe enough to outweigh the potential drama reporting the incident and having it go through formal channels. Looking back, I wonder if I did the right thing by not coming forward during those instances.  I think of who else may have seen what happened, and took my lack of follow-through as a sign that such behaviors (or worse ones) are okay.

I am not one to bring out a problem without also proposing solutions. However, I want to give you all time to reflect upon the severity of what I’ve written so far.  In my next article, I will share what I see as actionable solutions to this issue.

Jessica is one of the founders and president of The Hidden Parlor, a World of Darkness LARP network dedicated to supporting the in-person LARP experience and creating a cohesive setting while empowering players and storytellers at a local level.  In addition to her executive duties for the club, she is also their Arch-Technomancer (web developer) and graphic designer.  Her support of the fandom community extends to CONvergence – an annual science fiction/fandom convention – where she helps oversee the care and feeding of hundreds of hungry volunteers.  When not trying to save the world (one geek at a time), she portrays her Child of Gaia at the local werewolf LARP (The Last Stand: part of The Garou Nation), plays 16-bit video games, and tends to her three cats (Pirate, Ninja, and Doc Holliday)