As a female bodied gamer, character creation can be difficult sometimes. No, I’m not talking about the sexist view that women are bad at math, or that complex rules are too hard. I am talking about the answer to the question that I feel most female gamers or female presenting gamers dread. This loaded six word question that means something different when it is asked of a female presenting gamer.

Yes, when a male presenting gamer is asked this question it means exactly what it means, no hidden subtext. Does Valeros have brown hair or black hair? What armor is Harsk wearing? What instrument is Lem carrying today? All of these are perfectly normal questions with normal answers. However when this question is asked of female presenting gamers, it usually does not just mean ‘What does your character look like’ but another question instead.

Real Question: Is She Hot/Attractive?

How much skin is Seoni showing? What size are Feiya’s breasts? Is Alahazra’s Charisma high? These are a few of the many subtext questions asked of female presenting gamers. Everyone at the table wants to know if our characters are sexually attractive, and if their characters can get with ours. A fantasy takes over in their minds where they feel if they can befriend our character and get with them, that they can get with us in real life. I know many relationships have come about from first starting an in game friendship (including my own!) but that relies on attraction between the parties being mutual, instead of one sided. 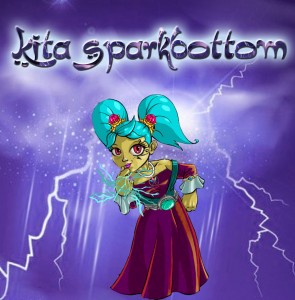 Take for example my character Kita. Kita was a Sorcerer in the Pathfinder rules set, so it was beneficial for Charisma to be my highest stat. My first PFS module was The Overflow Archives and I was excited to play in a game at my local gaming shop. In the module there was a section with some fey characters that you could either talk to or fight, and I chose to talk. It was then the party at the table realized my character had high Charisma, and even though they were annoyed I chose to talk instead of fight I was suddenly much more popular. One of the orcs gave me a ride on his shoulders in a flooded part of the dungeon. I got healed almost instantly when I was hurt by the party Cleric.

After the game was over, the Orc player asked me to coffee. I told him I don’t drink coffee so I’d have to decline. Then it was lunch at a restaurant I luckily did not like, so I said no again. Then he asked where I’d like to eat and I walked away, and have not returned to that gaming group. At no point did I learn anything beyond this player’s name, and they knew nothing of me other than my name and that I played a cute female character. They didn’t even ask if I was in a relationship or anything else before making it clear they were looking for a date. 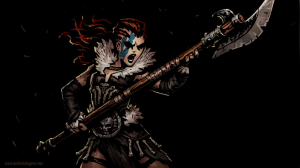 Ragin Jane Scarlett, the Woman With No Neck

Conversely to the above, I once played a pirate in the Skulls and Shackles adventure path named Ragin’ Jane Scarlett. She was a Barbarian and guard of her male friend and partner in crime Thomas Stringer. It was often said of Jane that she had no neck, just muscle. She was gruff and unattractive, and had no romantic interest or motherly feelings, and was nothing but platonic towards her adventuring partner. They formed a strong pirate crew and made terror on the high seas for those unfortunate enough to cross them.

No one at this group asked me to coffee, no one flirted with me in character as a veil for out of character. The only ones who made passes at me were a couple NPCs that I scared into submission. It was freeing and refreshing. I’ve played several more unattractive or not specifically attractive tabletop characters, including just playing men instead.  I find that most GMs and players leave alone male characters when it comes to their looks and don’t bring it up as often if at all. 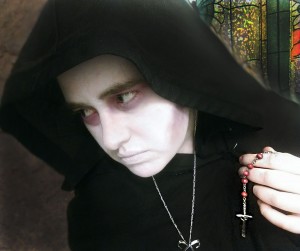 At one point in my LARP career, I played an attractive Brujah named Gianna (not pictured) who was a prostitute in her mortal life, inspired by Ros on the Game of Thrones show. Gigi, as her coterie and bloodline called her, wore short shorts that I shyly wore to game with tights under. I posted a selfie in the shorts after game, proud of wearing them. Almost instantly there were comments from the other players about the naughty thoughts they had and what they wanted to do with me. I did not ask for a review of how I looked or how nice the shorts and tights made my butt look. I deleted the picture because of how uncomfortable the comments made me, but I and many female presenting gamers deal with these comments constantly. Some can’t even post pictures of new Pokemon slippers without commenters asking for nude pictures.

I currently play Rook (pictured above), a Nosferatu that I have written about before. Once when visiting a game, I showed up already in costume. No one flirted with me in character because they found me or my character attractive. I looked unattractive with a gaunt face and giant cloak. I enjoyed an evening being able to be unharassed. Once the game was over, I stood up straight and revealed that my body is in fact female. I had several people whom I did not talk to all game tell me that the RP with me was good. They were all male presenting with surprised looks on their faces that I was female bodied. Up to that moment they disregarded me because they couldn’t see my female body, and I loved it.

The Answer: It Doesn’t Matter!

When I’m asked what my character looks like, I sigh.  I am always ready for them to follow up with “Is She Hot?” when I fail (on purpose usually) to mention their attractiveness. I tend to ask them why it matters and most of the time I find that it doesn’t actually matter. These are my experiences, and yours may be different. I feel that if you ask your female presenting friends you’ll find similar patterns of behavior towards their characters. When they play ugly or unattractive characters they will be treated normally. Female characters that are attractive are targeted by others who want to push their fantasies on the character. Perhaps keep this and the follow up article in mind next time you want to ask “Is She Hot?”

—
Anna uses she/her pronouns and is an avid LARPer.. Outside of LARP Anna is a feminist and part of the LGBTQ* community. She’s a console gamer, and is the proud owner of two loving cats. She can be found on Twitter at https://twitter.com/squeenoodles